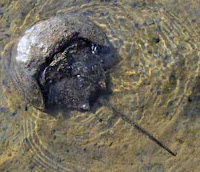 The beginning of no-left-turn season has arrived along with the pine pollen fog. The cool mornings invite cocoa on the porch, while the hot sunny afternoons beckon a read on the beach. Along the railtrail the scents of dry oak leaves mingle with iodine tinged salt air. The town triangle is bedecked with tricolors of stripes and stars. No place like it on earth. Nauset water claims to be 54 degrees, but my toe says its more like 48. No sailing this week since the arm is still enshrined in a cast. Maybe next time.
Posted by uurchin at 4:52 AM No comments: 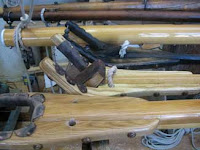 gaffs and a hinge for YELLOW JACKETs mast
Posted by uurchin at 9:39 AM No comments: 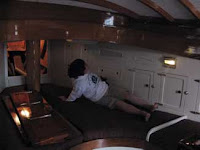 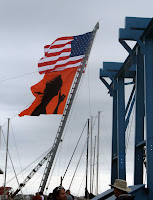 Party on the dock. 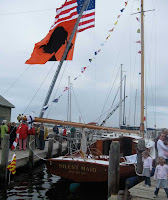 Her interior has new paint & cushions. 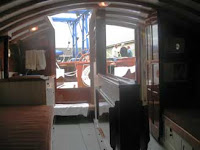 She has a new folding carbon fiber sink in the head.
New two speed steering gear in the lazarette. 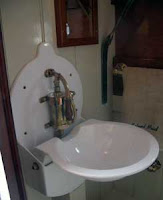 SLILENT MAID is back in the water at Beaton's. Tommy's crew 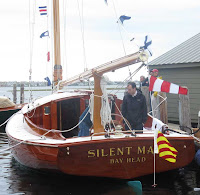 did a beautiful job shining her up and there are lots of improvements too. She has a new OCAM screens for racing, a revised waterline, new head mechanics and interior, all new cushions and towels. She also has new steering gear set in a carbon fiber housing.
Henry has re-rigged her with new lines and covered hoops, lots of shiny bronze. The engine can now be zipped in and out - out in a half hour according to the yard. She is lighter and looks faster.
Check out the new sink. Lots of love, patience and prodding went into that baby. Old pump, but a new design modeled in SolidWorks from the old cast iron one and then fabricated in carbonfiber and MAS epoxy by the Byars. Installed by Beaton's.
Posted by uurchin at 4:57 AM No comments: 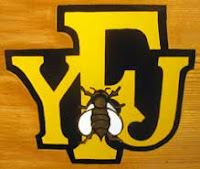 Yellow Jacket has a gold leaf bee.
Gina on whaleboat molds.
Posted by uurchin at 6:39 PM No comments:

New CEO for the Seaport 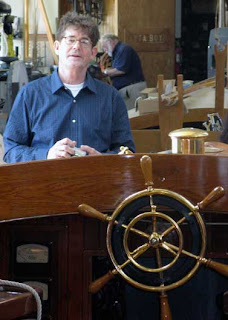 Best man for the job. Has 30 years experience. Can walk in the other persons shoes. Very creative. Thoughtful skipper. Fair winds and smooth sailing.
Posted by uurchin at 8:49 PM No comments: