The location of the aft butt joint is being marked so the plank can be cut to length. 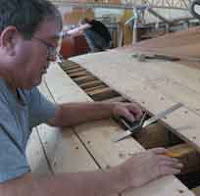 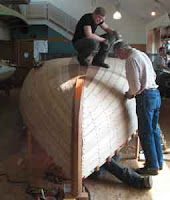 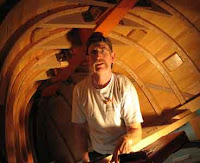 The final rivets are being driven home. Rivets are made from copper nails. Nails use a smaller hole than screws for the same holding power. Roves are placed over the clipped ends and then the cut ends are peened over with a pneumatic air hammer. This creates excellent holding power and a very tight structure. Everything must fit tightly together first. When the hull is closed the planks will be planed, sanded and painted. Then the hull will be righted and interior work will begin. 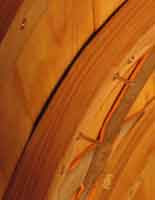 The mast is wedged into the deck to help transfer the load from the sail to the hull. The wedges are shaped for maximum contact to spread out and reduce the force. They will also determine the rake (lean) of the mast by their shape. Cleats are used to secure the halyards for peak & throat. 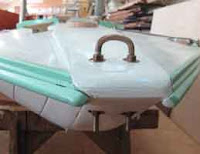 Chainplates distribute the stress through the planking to a frame and thus throughout the hull.
A shroud attaches to the chainplate and stabilizes the mast side to stide. It is adjusted with a turnbuckle. The large through u-bolt will attach the forestay and can also be used to attach a painter.

The rudder is attached to the boat with pintles and gudgeons. The tiller passes beneath the traveler which allows the mainsheet block to travel side to side without interfering with the helm. The traveler is under a lot of stress since it carries the boom side of the sail pressure and the deck is reinforced beneath so it carries the load across several planks.

Posted by uurchin at 6:33 PM No comments:

Dredging the basin.
Posted by uurchin at 7:20 AM No comments:

The steam box is used in order to make the planks pliable so they can take the extreame twist at the forward end. The process is a coordinated ballet between movers and clampers when the hot plank is removed from the sweatbox.

A port side plank is pulled from the hot box. The stem end is clamped and the plank is twisted to fit along it's sister and clamped while hot. The photographer is standing on top of the keel looking down. When the plank is cooled and dry, it will be planed to fit exactly and then riveted to the frames. You can see we are getting close to the closer plank, AKA the "whiskey" plank.
Posted by uurchin at 11:57 AM No comments:

Planks begin as rough cut 6/4 to 8/4 cedar. They are run through the planer to create parallel faces, edges don't matter at this point since each plank is spiled to fit. You can see a batten lined up on spiling marks to create the rough outline of the plank. Then it is band sawed to shape. The inside is hollowed to fit at each mold; see the template. We use a plane first and then sand and seal the inside before riveting it on the frames.

Some molds have been removed and will be returned to storage. Spyder is the third boat to be built by John Brady using these Sweisguth molds. In 1911, Francis Sweisguth designed the popular Star class boat based on a design by William Gardner. He also drew two A-cat designs. Tamwock (a codfish) was drawn for Francis Larkin in 1923 and Forcem was done for Edwin Schottle's syndicate. The earliest A-cats were designed by Charles D. Mower, a well-respected boat designer in 1922, as innovative racing boats created to beat the more common working catboats of the time. The working watercraft had been racing on Barnegat Bay since the railroads had made travel to the shore possible for Philadelphians. In 1871, the shore town of Toms River, NJ organized the Toms River Yacht Club and hosted the "Challenge Cup". Captains of all the local boats loved competition and wagering among crew and spectators was passionate. A trophy cup was created by the Tiffany Company and is the second oldest contest in American sailboat racing. The oldest is the famous America's Cup, originally from Britain. Two races were run in 1871 with eight Jersey catboats. The original boats were all working sailboats, shallow draft, either livery boats or freight carriers. By 1896, most working catboats had been displaced by boats built for racing on the bay.

The current fleet of A-cats have a common heritage of either Sweisguth or Mower design. The two are quite similar to a casual observer. Differences are in the shape of the bow and skegs, but cabins, cockpits and sailplans are the same. For more A-Cat history see A-Cats: A Century of Tradition, by Johnson & Wilkins, Nomad Press, 2005.
Posted by uurchin at 11:15 AM No comments:

When a plank is too short or not wide enough a butt joint can be used to complete the run. A backing plate is made from oak and sealed. The joint must be planned to occur between frames with support from planks above and below; in other words the joints must be staggered for strength. In the first picture you can see the oak butt block projecting above the run of the planks butted. Copper rivets and roves hold the two ends of the cedar plank to the block. The second picture shows the finished enclosed joint. The resulting seam will be caulked along with the rest of the seams when planking is complete. This is one of Spyder's joints.
Posted by uurchin at 11:01 AM No comments:

The sneakbox has topside paint. Kirby's is a family owned paint company which has produced marine paints for a long time. They have a loyal following in the community of sailors.

The rig for the sneakbox includes a mast, gaff, and boom. All are long considering the length of the hull, but that along with the tendency to submarine are what make duckboats exciting to sail. The racing versions are overpowered. A sail and spars were donated for this boat. The spars were picked up from DeRouville's boatyard down in Tom's River, close to the homewaters of this boat. A trial fit was made of the mast. John is marking for the wedges that will determine the rake of the mast. The mast is stepped through the deck and kingplank, into a step screwed to the frames along the keel. The mast transfers the wind's force on the sail to the hull and produces drive and forward motion. The old mast is spruce and needs to be reinforced where it threads the deck and re-varnished to protect it from the weather.
Posted by uurchin at 9:34 PM No comments:

The tiller is the connection between your mind and the heading of the boat. You exert pressure on the mahogany, it moves the rudder in the gougeons attached to the boat and the balance of the pressure of the wind on the sail and the water on the rudder puts the boat on the desired heading. The helmsman spends most of their time with a hand on the tiller, so the feel should be right. Not too big, small, sharp, just right.

Here is another interesting way to use pressure. We exist in a fluid medium, our atmosphere. The air above and surrounding us has mass. We use that mass to clamp layers of composite materials together using a method called vacuum bagging. In this case we are making the sneakbox centerboard, a device to resist lateral pressure and keep the boat from sliding sideways over the water and wasting drive energy. This centerboard is utilizing some reused plywood and scraps of unidirectional glass mat and carbon fiber in a composite sandwich. The duckboat has a very smooth bottom and round bilge like the bowl of a spoon. When the wind blows on the sail from abeam, it tends to roll the boat over on it's side and slide it across the water sideways. The centerboard counteracts this force by pushing on the water and resisting the sideways force translating it into a forward motion. It also has to slide through the water with as little resistance as possible so it has a foil shape.

The core of the board is plywood, faired to a sharp trailing edge. The next layer is glass set in West System epoxy. The outside layer is carbon fiber for stiffness also set in epoxy. Both layers are rolled on, the board flipped and the other side laminated. A bag is constructed from plastic and mastic. A layer of release fabric that doesn't stick to epoxy is put on and then a layer of breather fabric, kind of like felt. The entire sandwich is sealed inside the bag and then the air is pumped out until we reach a vacuum of about one atmosphere. That means there is about 14 lbs per square inch over the entire surface, top and bottom, of the board, squeezing the epoxy into the wood as well as evening out all the layers.

Posted by uurchin at 5:05 PM No comments: